$mart Money is a quarterly newsletter published by our company. The lead article discusses how our natural instincts can seriously erode our investment returns and how to avoid these pitfalls. The Investing 101 column reviews the basics of stocks and bonds.

Download your free copy of the $mart Money Newsletter 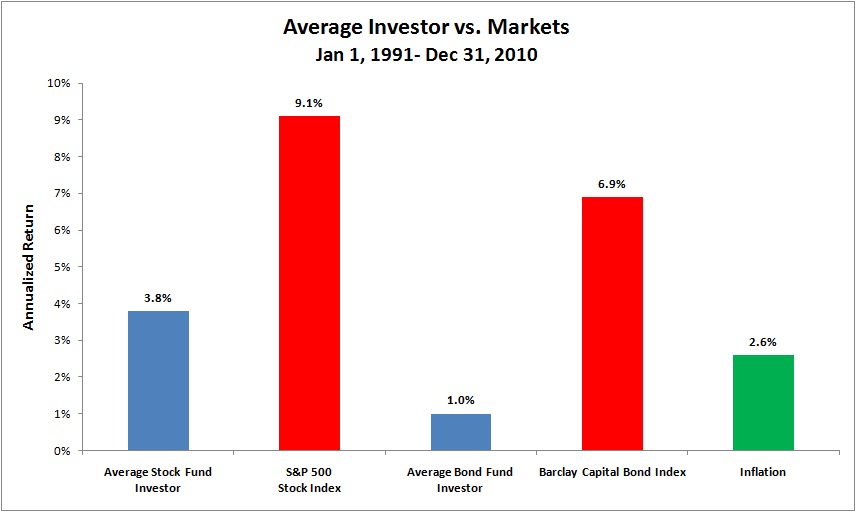 On Monday the Dow dropped 130 points on more European debt concern, this time a Standard and Poor’s downgrade of Italian debt. Weak manufacturing and service sector reports coupled with an increase in new-home sales in April led to a slight delcline in stock prices on Tuesday. The market rebounded slightly on Wednesday, ending a three-day losing streak. On Thursday, stocks once again logged a small gain despite a rise in jobless claims. However, the declining volume as the long Memorial Day weekend approaches makes it difficult to attach any significance to stock movements. Volume plummeted dramatically on Friday with stocks making slight gains to finish off the week with a loss.

Beware Top Funds With Poor Investor Returns – Yahoo! Financehttp://finance.yahoo.com/news/Beware-Top-Funds-With-Poor-tsmf-514712389.html?x=0If you invested in Fidelity Leveraged Stock a decade ago, your total annual return would have been 14.5%. But the typical shareholder had an investor return of only 4.0%. The reason for the gap is, most investors didn’t buy and hold for the 10 years. Instead, the average dollar in the portfolio…

Stocks ticked downward on Monday on renewed concern over the health of the recovering economy following weak manufacturing and housing reports. On Tuesday the Dow took a heavier hit than the NASDAQ and the S&P 500 as more concerning news over the health of the economy continues to cast a shadow on the market. Stocks snapped back on Wednesday when the Federal Reserve minutes indicated that the Fed will not change their monetary policy in the near future, preserving low interest rates for the time being. On Thursday, disappointing manufacturing and home sales reports were more than offset by exuberance over the doubling of networking website Linkedln’s stock price on its first day of trading after its IPO. Stocks retreated moderately on Friday following a downgrade of Greek debt and disappointing earnings and sales reports from Gap and Aerepostale.

It was an over all down week for stocks owing to Friday’s poor performance.
[table id=11 /]

Michael Hogan, CEO of FOLIO Investments Inc., helps answer this important question.  By the way, FOLIO is the custodian and clearing broker for NorthStar Capital Advisors.

Is Your Money Actually Safe With Your Broker?http://www.businessinsider.com/is-your-money-safe-with-your-broker-2011-5When Lehman Brothers went bankrupt in September 2008, most investors faced a question they had never considered: Is my money safe with my broker?

Exuberance over last week’s very positive non-farm payroll report still lingered on Monday, leading stocks to a half-percent gain on Monday, as oil prices exceeded $100/barrel once again. On Tuesday news of Microsoft’s $8.5 billion buyout of Skype propelled the market to another solid gain. Monday’s and Tuesday’s gained were effectively erased on Wednesday as the Euro dropped on further concern over Greek and Portuguese debt. On Thursday the seesaw market action continued with another half-percent gain following a morning swoon in stock prices. Greece’s debt weighed on the market once again on Friday, outweighing a positive consumer sentiment report. The major indexes finished down over a percent.

Stocks finished the week largely unchanged despite rather large swings throughout the week.
[table id=10 /]

According to Fidelity, the average balances  of 401(k) retirement accounts reached the highest level since Fidelity started tracking account values in 1998.

These figures show that contributing to a 401(k) early, at a “meaningful” rate and continuing to save makes a difference. Read more in this Bloomberg article:

Monday kicked off the trading month of May with a whimper with stocks registering minor losses despite the previous night’s news of the death of Osama bin Laden. It was another day of modest price movement on Tuesday as the dollar hit an all-time low versus the Swiss franc. On Wednesday the market suffered a more significant loss on disappointing manufacturing and private-sector jobs reports. Wednesday’s close marked the first time since October 2008 that the stock market lost ground over the first three days of the month. The decline continued on Thursday with a surprising uptick in new claims for jobless benefits weighing down stocks. Friday marked the one year anniversary of the May 6, 2010 “flash crash” that shook the markets at the time. This year, however, stocks rose moderately following a nonfarm payroll report that showed an increase of 244,000 jobs in April. Conversely, April’s unemployment rate rose to 9.0% from 8.8% in March.

Friday’s gain was not enough to erase the week’s losses, with small-cap stocks suffering much more than large-cap stocks.

Do you have bad investing habits?

Learn more in this post at The Digerati Life:

Bad Investing Habits That Keep You From Growing Your Investmentshttp://www.thedigeratilife.comAs an investor, do you find yourself with bad habits that keep you from enjoying great investment returns? There actually seems to be a tendency here for most investors to be unable to make any kind of money in the stock market. It appears that investment underperformance can be mainly attributed…