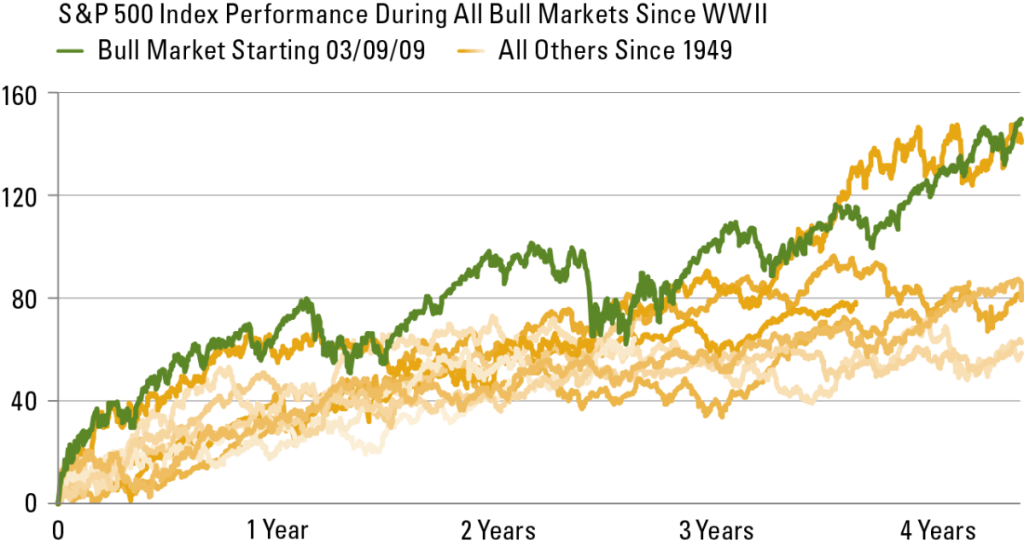 The current bull market that began in March 2009 is the strongest bull market recorded by the S&P 500 since the end of World War II (see green line in chart above).

The market has accomplished this achievement despite a litany of negatives,

This is not a fiduciary.

Does your financial adviser have a legal duty to give advice that’s in your best interests? The chances are that you think the answer to this question is “yes.”

Not everyone who gives you financial advice has a duty to actually help you. The technical term for the true helpers is ‘fiduciaries.’ That means it’s their legal duty to always put their client’s best interests ahead of their own.

There are some financial helpers who are fiduciaries. That includes certified financial planners and Registered Investment Advisors – usually known as RIAs. Their job description includes warning you away from any financial cliffs. Unfortunately, these people are a small part of the financial advice world – they make up less than 20% of the universe.

NorthStar Capital Advisors is a Registered Investment Advisor and has a fiduciary responsibility to its clients.

Read more about fiduciaries in this article.

Although it is tempting to actively alter your investments in an attempt to avoid loss in anticipation of market lows, historical data show that such efforts tend to backfire.  Fidelity, one of the largest 401(k) providers in the U.S., recently published an analysis of 12.3 million retirement accounts that vividly demonstrates the financial risks of market timing.  It’s important to note the comprehensive nature of the study period, Q3 2008 – Q1 2013, which starts from the pre-recession market high of 2008, through the deep bottom of Q1 2009 and the recovery to new highs in Q1 2013.

The figure above compares average account balance growth among three participant groups: Those who changed their asset allocations to 0% equity in the Q4 of 2008 or Q1 of 2009 and never returned (left pair of bars), those who moved to 0% equity but returned to some portion of equities by the end of Q1 2013 (middle pair of bars), and those who maintained an equity allocation throughout the period (right pair of bars).  The blue bars represent all retirement accounts while the green bars track pre-retirees defined as participants age 55 and older.

As the figure above shows, the differences in growth are remarkable. Those who stayed the course fared substantially better than those who retreated altogether or tried to time the market.  Investors who completely retreated from the stock market in Q4 2008 and failed to return saw their accounts grow by only 14.8% in the following 5 years (left blue bar).  Contrast this to the exceptional 88.4% growth enjoyed by investors who stayed the course by holding stocks throughout the market cycle (right blue bar).

The takeaway is the same for pre-retiree investors (green bars).  Disciplined investors who didn’t touch their stocks saw ~60% growth whereas market timers saw only half as much and those that fully retreated from stocks saw disastrous results.

NorthStar would like to take this special occasion to thank you, our loyal clients and friends, as today we celebrate 7 years of managing investment portfolios. We have come a long way since we rolled out our objective and disciplined approach to investing in 2006. Our success is attributable to clients and friends who faithfully support our business and receive great service and advice in return.

We deeply appreciate your loyalty and support over the past 7 years. We hope you and your family have a safe and happy holiday!

With heartfelt thanks,
Your NorthStar Team