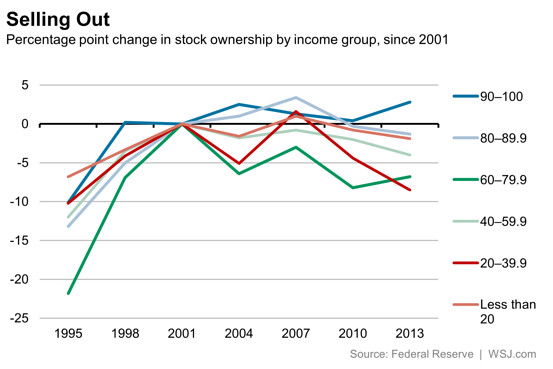 The Wall Street Journal reported this week that only the top 10% of income-earning households were able to hold onto their stock portfolios and ride the big rally over the past few years.  As a consequence, the wealth gap increased as the bottom 90% had no skin in the game as the market turned positive.

According to the Wall Street Journal:

The Fed’s Survey of Consumer Finances shows that among the bottom 90% of households by wealth, families bailed out of the stock market between 2007 and 2010—the central bank’s study is conducted every three years—and between 2010 and 2013. The total share with stockholdings declined by 4.4 percentage points. That’s the equivalent of 5.4 million households selling stocks, even as the market rebounded. Only households in the top 10% have been increasingly likely to own stocks.

This is strong evidence that the top 10% benefited from the power of having financial advisors while the bottom 90% went largely without.  Wealthy investors get better advice and are more likely to endure the pain of holding onto their stocks through down markets.